Massacre Of The Innocents 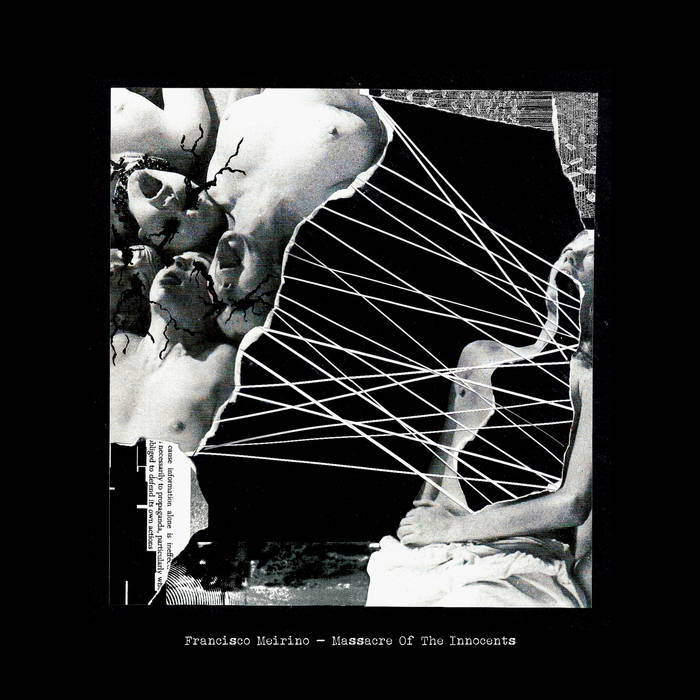 A constantly but yet subtle changing stream of voices, noises and electronic debris overlaid during the progression of the composition, „Massacre Of The Innocent“ is a philosophical product, a sound image created in dried humour. A live recording that breathes, kicks and screams on cursed ground, building a circle of an aural exorcism that develops in a warped spiral of sonic matter. However, the wink of the eye is never lost til the end.

While the a-side opens with mute elements slowly raising from the ground, a first peak of tension is reached within the six-minute-mark. The recording is a mixture of binaural elements and stereophonic elements, mixed and edited in a way to appear like a staged drama. Within the screeches of the floor, the bassy waves flooding the place and oozing over voices in a distorting manner, the music never drifts in any earbleeding or nerve shattering territory.
The second side resemble the opposite side in terms of start and buildup, elements are revealed and quickly torn apart like an unfocused memory. Here the voices have a more drone-like quality with small twists revealing an atmosphere of forbidden rituals. During the piece the voices become a more prominent factor, a roaring sheet of screams serving as a bed for crystalline feedbacks chanelled into the noises of snakes hissing.

That remains the twist of this package- despite the title the music serves more like a documentary, a sonic photography of the live events leading to the creation of „Massacre Of The Innocent“. The buzzes, the Pan Sonic-like drifts into highly progressive bass waves and strangled streams of cut-up noises are webbed in a peotic way – leaving enough pauses and seconds of aural breakdowns to keep the pace and spirit of the piece intact.

Francisco Meirino - Massacre Of The Innocents
Surround live performance for 10 speakers, performed and recorded at the Screamscape exhibition at Fri-Art, Fribourg, Switzerland, 06.06.2015.
Stereo line and binaural room recordings.
Stereo edit and mastering by Francisco Meirino march 2018.
Side A : 12’59
Side B : 12’20

Label for experimental music and all types of harsh sounds.
Run and founded by Jan Warnke.