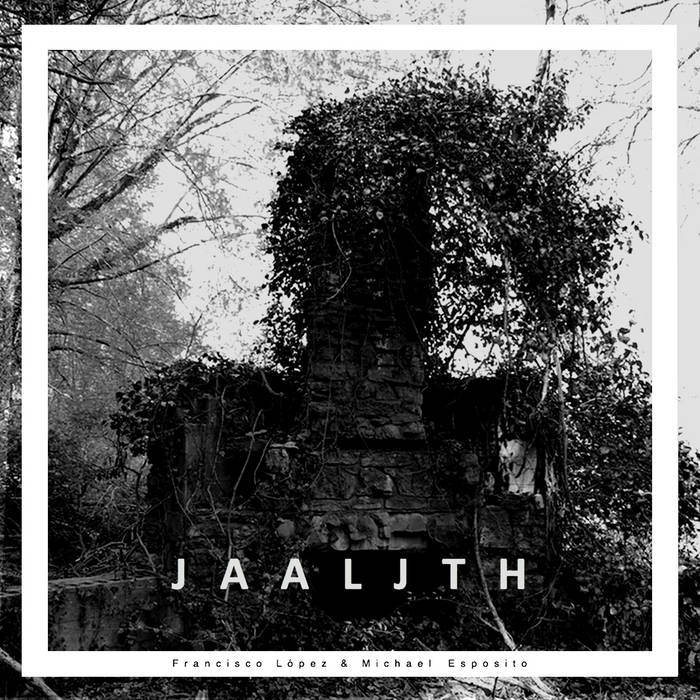 Rumor has it that Francisco López pulled out a quija Board while listening to the EVPs on this recordings and given these letters for the title.
Michael Esposito captured the EVPs at the Witches Castle of Utica, Indiana – a land that was stolen from three Métis sisters, who, at the hands of one ferryman, James Noble Wood, were bound onto a raft and to their deaths over the Falls of the Ohio River. But not before they cursed James, the vigilante townsfolk and the town.

The town failed. Years later, Three mysterious sisters descended on the town building a Castle-like shack up in the wooded bluffs of a quarry. Anti-social, nocturnal and sinister, the sister drew the town's suspicion. Baskets filled with odd roots, geodes, and animal bones were piled up on their front porch, and repugnant smells bellowing from the chimney led the townsfolk to deem them witches. The sisters were treated with disdain and unwelcome. Then the children started to go missing.....
Did the spirits spell out an admission of revenge upon a hateful and cruel town?
Do the voices on this CD echo the children's cautionary tale of treating strangers with better care?
You do the math.

Review by VITAL WEEKLY #919:
By now the name Michael Esposito should be connected, straight away, with EVP, the electronic voice phenomena, also known as voices from beyond. I recently received some of these from him, the raw data, and it sounds very much like the eight short pieces that open up 'Jaaljth', his collaborative work with Francisco Lopez, and judging by the titles they are the same. This is followed by eight processed pieces by Lopez, called 'Jaaljth', although individual pieces refer to the original sources, then a piece by Esposito, which is much longer than the source pieces and an even longer processed version thereof. Multiple pieces! That seems to be a rare thing in the CD world of Lopez (but it happens!). It's not easy to follow the routes he takes into the source material and detect any of that in these pieces. It's however great to hear him operate in a short time frame for this pieces. Once he goes all silent, in 'I'm Freezing', but in the other pieces we are able to follow the computer processing that takes place. More so than on his older work, it seems to me that Lopez is now extensively using computer technology (max/mps, pure data, audiomulch, who knows?) to transform what he calls sound matter. Time stretching plays an important role, and so does granular synthesis. Nice! In the longer Esposito piece there is more a balance between the original EVP recordings and what seems to be synthesizer/electronics/computer processing, which are gradually taking over the piece. Very nice. In the Lopez version of this, it gradually dies out in static crackles and marks a fine ending to a great release.

Label for experimental music and all types of harsh sounds.
Run and founded by Jan Warnke.